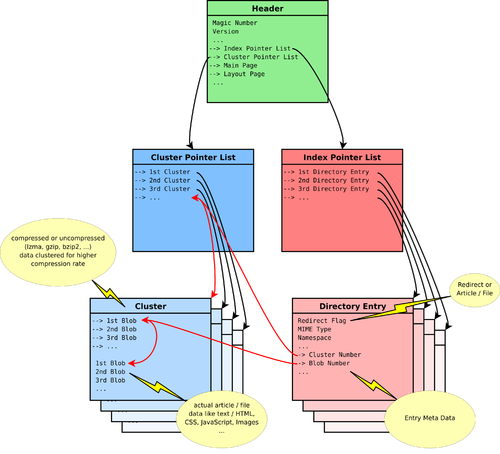 The ZIM file format is based on the old and deprecated Zeno File Format. See also a walk through example at ZIM File Example. It starts with a header, which is described here:

A ZIM file starts with a header. This is offset 0.

Length in bytes, all types are little-endian.

The MIME type list always follows directly after the header, so the mimeListPos also defines the end and size of the ZIM file header.

The MIME types in this list are zero terminated strings. An empty string marks the end of the MIME type list.

The directory entries are always ordered by URL (including the namespace prefix). Ordering is simply done by comparing the URL strings in binary.

Since directory entries have variable sizes this is needed for random access.

Zimlib caches directory entries and references the cached entries via the URL pointers.

The indirection from titles via URLs to directory entries has two reasons:

Directory entries hold the meta information about all articles, images and other objects in a ZIM file.

There are many types of directory entries:

The cluster pointer list is a list of 8 byte offsets which point to all data clusters in a ZIM file.

The first byte of the cluster identifies if it is compressed (4) or not (0). The default is uncompressed indicated by a value of 0 or 1 (obsoleted, inherited by Zeno) while compressed clusters are indicated by a value of 4 which indicates LZMA2 compression (or more precisely XZ, since there is a XZ header). There have been other compression algorithms used before (2: zlib, 3: bzip2) which have been removed. The zimlib uses xz-utils as a C++ implementation of lzma2, for Java see XZ-Java.

The offset addresses uncompressed data. The last pointer points to the end of the data area. So there is always one more offset than blobs. Since the first offset points to the start of the first data, the number of offsets can be determined by dividing this offset by 4. The size of one blob is calculated by the difference of two consecutive offsets.

The index actually consists of a list of indices assumed to be ordered by importance. The idea is that the indices are searched in order until a certain amount of search results is found, such that at low zoom levels, only the important articles (countries, large cities) are displayed.

All offsets in the geo index are counted relative to the start of the geo index. This means that in order to get absolute file offsets, you have to add the value of the geoIndexPos field in the file header.

At geoIndexPos, the geo index starts with the following table:

Each geo index is a binary tree of coordinates alternating between latitudes and longitudes (starting with latitudes) ending in a list of coordinates and article indices as leaves. A non-leaf node is encoded as follows:

Leaf nodes containing the actual coordinates and links to the articles are encoded as follows:

The title indices in the above table are article numbers just like in the title pointer list.

It can be assumed that the index is generated in the following way: All coordinates are sorted by latitude. The median is stored as discriminator value, the first half of the coordinates is stored in a "lower node", the second half in an upper node. For each of the two nodes, the coordinates are sorted by longitude and are split in much the same way until there are less than a specific number of articles (e.g. 10) left at which point they are stored as a list in a leaf node.

Namespaces seperate different types of directory entries - which might have the same title - stored in the ZIM File Format.

Absolute URLs, ie. with a leading slash (/) are forbidden, because this avoid including the ZIM contents in any HTTP sub-hierachy. ZIM contents URLs must consequently be relative. Be careful, <article_url> may itself contain slashes (for example "BMW_501/502").

The URLs in the UrlPointerlist are not encoded. Some readers process the requests that already do the decoding internally whereas most readers will handle the URLs directly. In this case you have to do the decoding before you pass the parameter to zimlib, but zimlib already provides a method to do so.

Many articles - especially when a table of contents is used - use local anchors to jump within an article.

If you use a common rendering engine or HTML widget you don't have to care for this cases, you can just use the requests as they are submitted by the engine / widget.

Should you render the article contents by yourself you have to consider this and take care of it before you hand requests to zimlib.

The standard encoding for ZIM file content is UTF-8. So both article data and URLs should be handled accordingly.

Old Zeno files used a mixture of Latin1 and UTF-8 so there is still some "auto detection" code left in the zimlib, a workaround for this bug. This will be removed in future versions. Zeno files are not supported anymore.

For integer encoding the same algorithm as UTF-8 encoding is used. This encoding is also known as "integer compression". It safes some bytes by using variable lengths of integer fields, depending on the actual value of the number.

Old Zeno files used the QUnicode library instead. By switching to UTF-8 the new format is more standard-adherent and easier to understand.